As part of the Ohio Main Street Program, Heritage Ohio hosts quarterly Revitalization Series trainings in Main Street communities across the state, focused on the four points of the Main Street approach. An ongoing conversation in the preservation world centers on what to do with historic buildings that have outlived their usefulness, or have simply become obsolete. In late July, roughly 40 Main Streeters gathered in Medina to tour and consider three outstanding examples of adaptive reuse, radically re-envisioning the possibilities for vacant properties.

First, the group took a walking tour of the four story, 40,000 square foot Medina Farmers Exchange property. Constructed in the 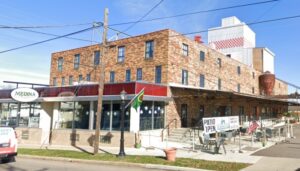 mid 1930’s, this building is solid, reinforced concrete with brick facing. It operated as a farmer’s exchange, and then a feed and farm supply store until 2018, when it was eventually condemned by the City as unsafe and a potential danger. Purchased by four local investors, the structure has undergone a complete rehabilitation using Historic Tax Credits, and now houses a micro-brewery and BBQ carry out restaurant on the garden level, a farm-to-table restaurant, butcher shop, food and goods market, and coffee house on the first floor, and 16 lofts on the second and third floors. The Farmers Exchange has become an important anchor for the Main Street Medina South Town Arts & Entertainment District.

Our next stop was the incredible Castle Noel, acknowledged as America’s largest indoor year-round Christmas entertainment attraction. In 2013, while visiting Medina for their annual Candlelight Walk holiday event, Mark and Dana Klaus took notice of a vacant, 30,000 square foot former Methodist Church that was for sale. With a last name like Klaus, and being in Medina during the holiday season, the building (which was being considered for demolition after having been on the market for over two years) seemed like the perfect place to open Castle Noel. Over the next decade, Klaus has reimagined the original 1890s church and subsequent 1960s addition into an incredible maze of Christmas joy, featuring original costumes and props from some of the biggest Christmas movies ever made; rare holiday window displays from Lord and Taylor, and Bloomingdales, a nostalgic collection of toys through the decades, and much more. The interior is no longer recognizable as a church, but through creativity and discovery, has been given a new use.

The final tour of the day was the sprawling Medina Foundry complex. Originally built as a foundry in the 1860’s, and over time serving as the factory for Hollow Ware cookware, and lastly as the Henry Furnace Company, the building grew into an impressive 190,000 square foot complex through additions and expansions. By the time the current owners purchased the property at auction, it has fallen into severe disrepair, ceilings and floors had collapsed or simple rotted away, it was open to vandals, and was a massive eyesore in the community. The owners have taken a long, phased approach to rehabilitation of the building. In 2013, High Voltage Indoor Karting opened in a roughly 10,000 square foot section of the warehouse. In 2019, Foundry Social opened in an adjacent warehouse, utilizing another roughly 8,000 square feet of the structure. This fall, Foundry will add a wedding and reception venue in one of the original, 1860’s factories on the property. Future plans have included the consideration of a conference center and hotel, a museum, housing, and event space.

Heritage Ohio applauds the creative vision of local investors who see the value in historic properties and saves them through adaptive reuse. We look forward to seeing new examples of this in communities across Ohio.

← Do you Know Your Incentive Return on Investment? Get the Answer at OEDA’s ROI / Financing Gap Course, September 2 in Springfield Placemaking Interventions to Mitigate the Impacts of Climate Change →