Since the early 2000s, the Center for Automotive Research (CAR) has been tracking publicly announced North American automakers and supplier investment details. This information populates a proprietary database known as The Book of Deals, which is a part of CAR’s Automotive Communites Partnership (ACP). The Book of Deals covers capital investments—such as updating equipment, increasing production capacity at a plant, or building a new facility. The following analysis focuses on automakers that have publicly announced investments in North America from 2009 to 2019.

Since the 2009 recession, automakers have announced over $141.0 billion worth of investments in North America. The United States received the largest share of announced investments during this timeframe (76 percent), with Mexico (17 percent), and Canada (6 percent) accounting for less than a quarter share of North American investment combined. The majority of these announcements were allocated to manufacturing facilities, as shown in Table 1 below.

*Note, the investment by type analysis will not equal the total investment for 2009 to 2019 YTD. This discrepancy is because several investments did not disclose enough information and, therefore, are not included in this analysis.

Over the years, the “big dollar” investments in new automotive facilities tend to receive a disportionate amount of media and industry attention. An example of these types of investments include the following:

While these new facility investments tend to garner attention throughout state economic development organizations, government officials, and the general public, these big prizes make up less than 20 percent of all North American automotive investments. Figure 1 below shows that more than 80 percent of automaker announcements across North American since the recession have been re-investments into facilities. Re-investments include expansions to offices or plants as well as retooling of manufacturing facilities for a next-generation vehicle or new product. 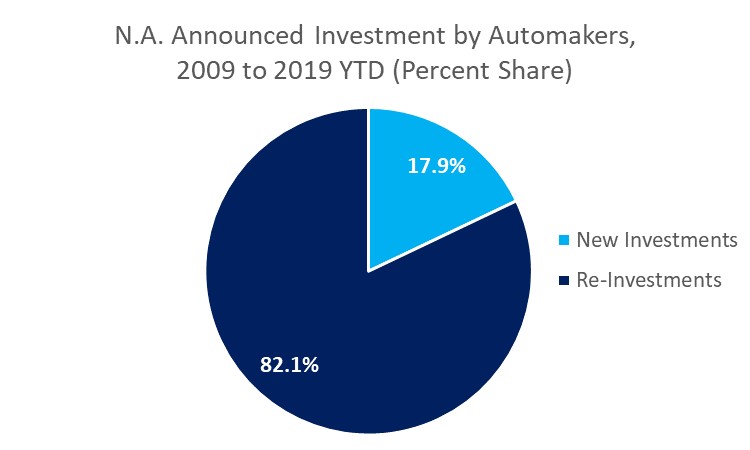 So far this year, automakers have announced 62 investment projects totaling more than $17.0 billion across North America. These investments are projected to create or retain nearly 36,000 jobs. The most significant automaker announcement made this year was GM’s October plans to invest a total of $7.7 billion across several plants in the United States throughout the next four years. These investments were made public in conjunction with the company’s new labor agreement between GM and the UAW, and includes GM’s plans to invest $3 billion into its plant in Hamtramck, Michigan—the most significant single investment announcement made this year. The GM-Hamtramck investment is to retool the assembly plant to build electric pickups, vans, and battery modules and is projected to create or retain nearly 2,500 jobs.

[1] Note – In the original announcement, Toyota planned on producing the Corolla at this facility; this is no longer Toyota’s planned product for this plant.