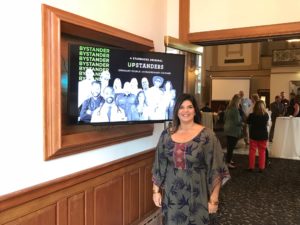 Middletown resident and business owner Ami Vitori is featured in an episode of the newly released Starbucks Upstanders: Season 2.

Upstanders Season 2 is described on the Starbucks website as “a collection of short stories celebrating ordinary people doing extraordinary things to create positive change in their communities. These stories of courage and humanity remind us that we all have the power to make a difference.”

“The courage and leadership Ami displayed in standing up for her hometown inspired us to share her story with millions of Americans through Upstanders Season 2,” said Rajiv Chandrasekaran, executive producer at Starbucks, who co-created the series with executive chairman and former CEO Howard Schultz. “Ami’s story, and others like it in Upstanders, reveals a different side of America than we often see on television or in our social-media feeds. These stories are set in small towns and big cities, from coast to coast, and they introduce us to people just like Ami who are fearlessly challenging the status quo and making our communities better. We are proud to work with Ami and thank the city for the warm welcome we received when filming this episode in Middletown.”

Vitori, a fourth generation Middletonian recently moved her family back to Middletown to help with the revitalization of the city. The episode follows her through Torchlight Pass, a 40,000 square foot building in the heart of downtown that she purchased, renovated and added several businesses to since 2016, including a hair salon, yoga studio and restaurant.

“This city doesn’t get rebuilt in just a day,” said City Manager Doug Adkins. “Individuals like Ami investing in this community makes an impact and boosts downtown Middletown for the revitalization we have been working towards.”

A screening of the film was shown at a private event for media and community representatives on October 11. The film can be viewed at: https://starbuckschannel.com/episode-09-saving-middletown/. It is also available on starbucks.com/upstanders, Amazon direct video, and Audible.