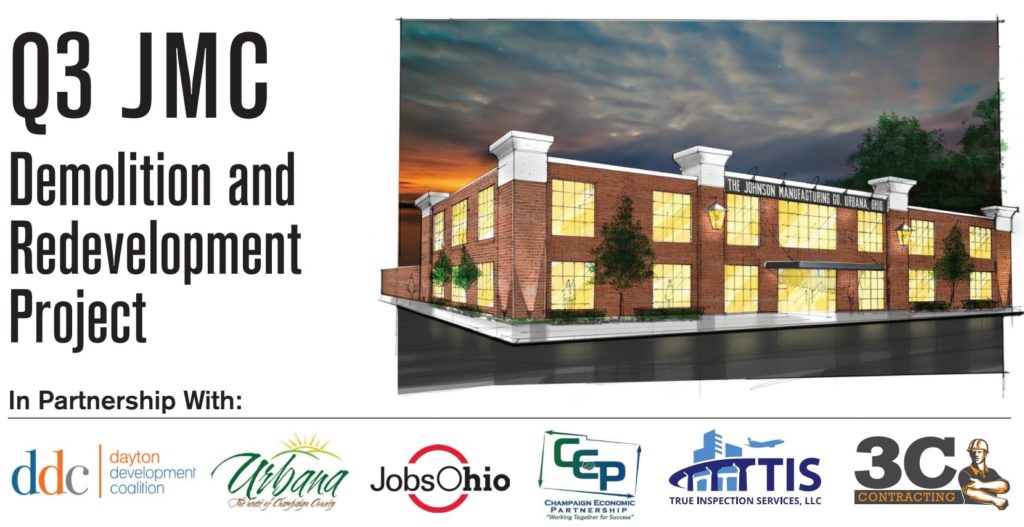 This graphic of a sign, which will be installed at the redevelopment site in Urbana, features partners in the project and an artist’s rendering of proposed restoration of the former Johnson Manufacturing building on Miami Street in Urbana.

Demolition and cleanup of the former Q3/JMC, Inc. manufacturing site in Urbana is ready to begin – a key step toward preparing the abandoned property for new industrial development and job creation.

Urbana Director of Administration Kerry Brugger announced at the Sept. 19 Urbana City Council meeting that the City of Urbana had finalized an agreement with Urbana-based developer True Inspection Services (TIS) to direct redevelopment work of the 20-acre site at 605 Miami St. and 200 Beech St. The property, zoned for manufacturing, has been vacant since Q3/JMC ceased operations in 2008.

TIS has been awarded a JobsOhio Redevelopment Pilot Program reimbursable grant of $883,947 to help cover the cost of the two-year project, which will involve demolition, environmental remediation, asbestos abatement, removal and disposal of waste, and site preparation.

The City of Urbana officially gained title to the abandoned property in May and is providing $348,435 in matching funds. TIS is contributing $116,145.

Through a separate agreement with the city, Honeywell International, Inc. is responsible for cleaning up groundwater contamination in an approximately four-acre section on the west side of the property, which had been used by Grimes Aerospace’s Plastic Research Products business. Honeywell became liable for the cleanup, having acquired Grimes Aerospace.

Brugger said that the Honeywell cleanup is targeted to begin in October. Barry Couts, TIS founder and owner, said his company will soon begin advertising for bids for demolition and cleanup of the site.

Once cleanup is completed and meets Ohio Environmental Protection Agency VAP cleanup requirements, title to the property will transfer from the city to TIS, Brugger said. TIS will prepare the site for development by a new owner.

The Champaign Economic Partnership will work with TIS to market the property for reuse, Marcia Bailey, CEP director, said.  “Having a 20-acre greenfield in Urbana that is zoned M-1, for industrial use, will be extremely advantageous for economic growth and job creation in our county.” She added that the CEP will use its established network of local, regional and state contacts to market the property to businesses that are seeking space to expand or establish operations.

Bringing the project to this point has required cooperation of many parties, Bailey said. These include the city, Honeywell, JobsOhio, the Dayton Development Coalition (DDC), TIS, the CEP and the Champaign County Board of Revision, which earlier this year approved transferring the property from the county to the city and directed the county auditor to cancel delinquent taxes on the property.

Bailey assisted with the private development agreement between the city and TIS. And last year on behalf of TIS, she wrote an application for the JobsOhio Site Redevelopment Pilot Program grant.

JobsOhio was encouraged by the number of community partners involved. “We want to see partners at the table,” says Kristi Clouse, executive director of operations for JobsOhio. “The community has to work together to help us market the site” to attract business development.

Utilizing revitalization funds, JobsOhio created the Site Redevelopment Pilot Program to return properties in need of remediation to the commercial development market – and to help make up for a deficit of commercial properties ready for development and business expansion since recovery from the recession.

“Ohio didn’t have all the inventory we needed to attract job creating companies,” she said. She added, “Champaign County didn’t have available inventory for business development and was missing out on job creation opportunities. And there was this site, right in Urbana, on U.S. 36, already with utilities on site. It has a lot of good attributes to it.

“We had multiple discussions with the city. The city has played a key part in the grant. This project has been a lot for the city to take on and not all cities would do this. But they recognized how important this site is for their community. They really stepped up to the plate.”

Sarah Custer, project manager at the Dayton Development Coalition, said, “Older industrial sites can present significant redevelopment challenges for communities, since they often need extensive remediation. JobsOhio’s Redevelopment Pilot Program will provide vital resources for the Q3/JMC property, allowing the community to plan for the site’s reuse and attract new users to bring new jobs and investment to the heart of Champaign County.”

“As a developer,” Barry Couts of TIS said, “you look at the end result of a development. This project will help add jobs. I want to bring development to the county and jobs to the community.”

A native of Urbana, Couts said, “I remember when this property was booming as Johnson Manufacturing. That’s another reason I want to see it developed. There’s a lot of history in it.”