The Columbiana County Port Authority recently completed three expansion projects for Columbiana County river terminals in the first round of the Ohio Dept. of Transportation Maritime Assistance Program grant.  Through the securing of the grant, with a 50% match of funds, the recipients were able to complete nearly $3 million of combined projects for their business operations on the Ohio River. 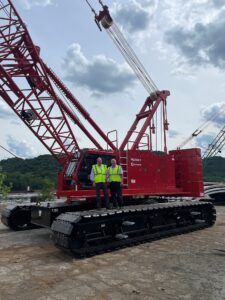 The Port Authority administered the grant and served as the pass-through for the funds.  The Ohio Maritime Assistance Program was designed exclusively for water-based freight infrastructure in Ohio.  Initially, $23 million in funding was available for Ohio port authorities on Lake Erie and the Ohio River.  Port Authority Executive Director Penny Traina stated, “The creation of the Ohio Maritime Assistance Program will allow the port authority to increase the capability of cargo handling to facilitate commerce in this rapidly growing region.  In 2018, Columbiana County moved 2.3 million tons of cargo on the Ohio River.  As we look to the future with the petrochemical industry, the Ohio River will play an integral part.”