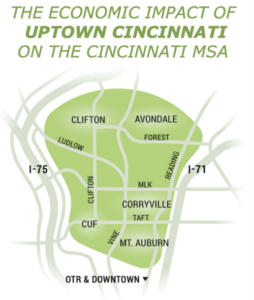 Uptown Consortium Inc.’s (UCI) community partners are gearing up for a year of collaboration, relationship-building and community engagement. Projects in Uptown’s five core neighborhoods: Avondale, Clifton, Corryville, University Heights (CUF) and Mt. Auburn are in various stages of development—but all with the goal of maintaining Uptown’s status as one of Cincinnati’s most vibrant and eclectic areas.

As the official voice of Avondale, the Avondale Community Council (ACC) has never been shy about shining a spotlight on what makes Avondale an ideal place to live, work, play and do business. Increasing and improving affordable housing will continue to be one of the organization’s top priorities in the coming year. Making that priority more achievable, said Tony Moore, President of ACC, is Uptown’s enormous potential compared to other Cincinnati neighborhoods.

“We believe that this potential will lead to increased diversity as well as opportunities throughout the city and state,” Moore said.

The growth and development of new and existing businesses are at the forefront of the Avondale Business Association’s (ABA) plans, according to the organization’s Chairman, Bill Witten. He pointed to the committee’s mission to create, nurture, empower and support a strong, diverse economic base as a continued focus.

“The diversity of the neighborhoods, the partnerships, and the transformative investments in infrastructure, commercial and real estate development and innovation make Uptown unique,” he said.

Clifton Town Meeting (CTM), Clifton’s official community council, has directed its 2022 attention toward events, programs and installations that will build on its palpable sense of community. Gerald Checco, CTM’s newly elected President, said a clock tower at the intersection of Clifton and Ludlow avenues will be officially dedicated to COVID-19 first responders when it is installed in March.

Additionally, CTM is planning a summer and spring concert series on the Clifton Plaza, a Fall Street Festival on Ludlow Avenue, and its annual golf outing fundraiser to benefit CTM programming. There will also be three volunteer-based clean-up events to remove litter and graffiti, as well as install new plantings and landscaping.

The Clifton Cultural Arts Center (CCAC) is stepping up in 2022 as well. “CCAC is concentrated on bringing live performing arts series to all five neighborhoods of Uptown,” Checco said.

The Short Vine Association (SVA) is predicting a record year of growth and opportunity for merchants, following nearly two years of uncertainty throughout the COVID-19 pandemic. Patrice Eby Burke, SVA President, said the Short Vine entertainment district has several projects in the works for 2022.

“In 2022, we hope to build on our ‘clean and safe’ efforts by investing in new signage and wayfinding, upgraded Living Wall infrastructure, street lighting, public safety and robust events,” Burke said.

The reason Burke believes Uptown stands out is its walkable areas and successful business districts. Additionally, Dan Luther with the Corryville Community Development Corporation shared that Piada will be opening a location soon in Stetson Square.

The Clifton Heights-University Heights-Fairview Neighborhood Association (CUFNA) has high expectations for the year ahead. The organization is working with developers on at least four major projects this year, all of which are in varying stages of development, said Jack Martin of the CUFNA Board of Trustees.

CUFNA is also working with the City of Cincinnati to implement recommendations from the CUF Parking and Transportation Analysis. Improvements at Bellevue Hill Park—based largely on the results of a public survey conducted last summer—are also being made, Martin said.

Matt Bourgeois, Director of CHCURC, said his organization is continuing its efforts to stabilize vacant and abandoned homes in CUF communities.

“In 2022, CHCURC plans to directly intervene, through receivership or acquisition, five properties representing approximately 10 units,” Bourgeois said. CHCURC is also working to develop the two-acre site at the corner of Vine and Calhoun streets to serve as a gateway to the Clifton Heights neighborhood and the University of Cincinnati. Another priority is to bring additional workforce housing to the area.

Martin believes Uptown’s attractions, amenities, and institutions such as the University of Cincinnati, hospitals, and the Cincinnati Zoo & Botanical Garden—as well as other educational, cultural and entertainment destinations—add to the overall appeal of the city.

The Mt. Auburn Chamber of Commerce (MACOC) has dedicated itself to continuing to foster relationships in the community.

“MACOC is seeking to re-establish itself as a conduit of networking, growth and positive efforts on behalf of the community,” said Rob Festenstein, Executive Director of MACOC. “Even in the COVID era of virtual meetings, we want to capitalize on the enthusiasm of our members and stakeholders.”

Festenstein said he often refers to Uptown as an “oasis” within Cincinnati, with “diverse businesses, history, populations and on the cusp of continued transformation.”

Director of Community Development, Brooke Rapp, agrees with Festenstein’s sentiment. “The last two years have been difficult, uncertain and frustrating for our residents, business owners, partner organizations and member institutions,” Rapp said. “But one thing is immediately clear from the way Uptown’s community groups have responded: the collaborative, innovative and committed nature of these neighborhood groups underscore just how special Uptown is. I can’t wait to see what the year has in store.”