The International Economic Development Council has defined placemaking as “the practice of enhancing a community’s assets to improve its overall attractiveness and livability.” Placemaking is defined as large-scale projects like the creation of new public or revitalized public spaces, alternative transportation infrastructure, pop-up retail, housing, or Downtown beautification projects.  Bike trails, public beer gardens, parks, and other public spaces often mix uses and are attractive to residents and visitors alike. However, successful placemaking strategies require the use of multiple tools as well as an overall improvement in the quality of life available to area residents and visitors. 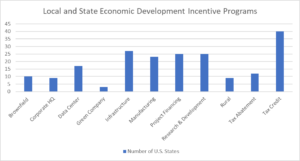 Tax credits are tools private developers, investors and individual companies use to reduce tax burdens in exchange for economic growth.  Ohio’s Transformational Mixed-Use Development Program provides a tax credit against Development costs incurred during the construction of a project that will be a catalyst for future development in its area. A Development includes new construction and/or improvement of vacant buildings that will have a major economic impact on the site and the surrounding area. This Development must be a combination of retail, office, residential, recreation, structured parking, and other similar uses into one mixed-use Development.  Projects may be either the entire Development or a phase or contiguous phases within the Development. Eligible applications will be divided based on location of the Development, resulting in two funding groups: “major city” and “general”. A Major City Project is located either within a major city, as defined in program guidelines, or within a ten-mile radius of the corporate boundary of the city. Developments that do not meet these location criteria will be considered General Projects.  The Ohio Department of Development has $100 M in TMUD tax credits to award in each of the next two fiscal years.

Federal New Markets Tax Credits provide a funding source for projects located in federally designated low-income areas.  The Federal New Markets Tax Credit provides a 39% Federal Tax Credit Over 7 Years and $1M Ohio Tax Credit paired with Federal Credit for real estate investments in poor communities through complex transactions involving retail, office, and manufacturing projects. New Market Tax Credit projects involve the gaining of an allocation of the federally awarded tax credit from an awardee of the credit.  The challenge for use of this program is the demand for projects far exceeds the availability of New Market Tax Credits.

Tax Increment Financing (TIF) is the most popular tool for local governments to finance public improvements within their districts or areas. TIFs started in California in the 1950s, and today, the District of Columbia and all of the states, other than Arizona, have adopted some form of TIF program.[iv] Local government pays for public improvements and infrastructure by capturing the future tax increments from the project’s area under a TIF.[v] The local government issues bonds to finance the project, and the bonds are paid for later through the increase in taxable property value the improved area receives.[vi] This increase in taxable property value is the “tax increment,” and it goes directly toward repaying the debt incurred by the local government on the issued bonds.[vii] TIF does not require an increase in taxes or a new tax levy. Generally, property taxes are the type collected, but a few states allow for other taxes, like sales taxes, to be included in the collection.[viii] The taxes are then placed in a special fund, which reimburses the principal and the interest of the issued bonds.[ix] Once the value of the property increases, the gain in the taxable value goes to the local government to repay the debt incurred by the issued bonds. Thus, if the process works as planned, the project is self-sustaining and provides a benefit to the community without any new or increased taxes.

TIF bonds are permitted to fund project costs and “public infrastructure.” What constitutes a public infrastructure varies from state to state. Public infrastructures is defined as improvements to land, streets, water lines, sewer facilities, buildings, bridges, highways, pedestrian walkways, storm drainage, traffic-related instruments, landscaping, schools, and parking structures.[x] More expansive jurisdictions allow for the funding of commercial, industrial, and residential structures.[xi] Further, the use of eminent domain to acquire land is permitted in most TIF projects. As to project costs, they typically encompass all necessary and incidental costs of a development project such as the costs of issuing obligations, relocating displaced persons, organizational costs, and professional services fees.[xii]

As the table below illustrates, states like Ohio offer substantial infrastructure and site development incentives. 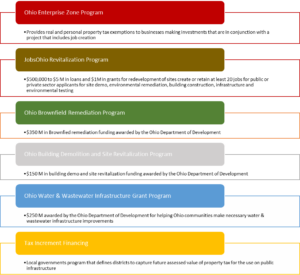 Please contact Nate Green at ngreen@montrosegroupllc.com if you need assistance with utilizing economic development incentives for placemaking or other economic purposes.

JobsOhio, the state’s private nonprofit economic development corporation, released its 2021 Annual Report and 2022 Strategic Plan, which showed 2021 to be a landmark year. In 2021, more than 29,000 new jobs were committed, and companies planned more than $6.9 billion in capital investment in Ohio.

END_OF_DOCUMENT_TOKEN_TO_BE_REPLACED

When Ohioans bring their recyclables to the curb or to a community drop-off location, they might not give much thought as to where materials like soda and water bottles go from there.

When we recycle, we aren’t only protecting the environment by diverting trash from the landfill; we are also supporting jobs, consumers and Ohio’s economy.

END_OF_DOCUMENT_TOKEN_TO_BE_REPLACED

Making Way for People: The Future Is Now

When the MLK Interchange opened in 2017, the vision for Uptown Cincinnati as a district that will incubate talent and attract businesses officially began. Fast forward five years and the four quadrants at MLK and Reading Road in The Cincinnati Innovation District® (CID), a mixed-use development supporting Uptown’s medical, research and innovation industries, is quickly coming to life as construction finishes on the highly anticipated University of Cincinnati Digital Futures building, the centerpiece of the Digital Futures Complex. Over the next decade, there are plans for an additional two million square feet of mixed-use development with 7,500+ people working, visiting, and living there each day.