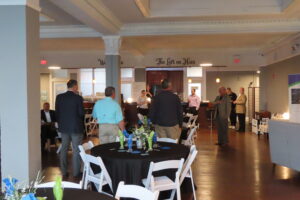 “Our opportunity to celebrate the 10-year anniversary of the donation of the Air Park was compromised last year,” said Dan Evers, Executive Director of the Clinton County Port Authority. “We wanted to recognize the occasion this year and gather those who have been instrumental in the success we enjoy today.”

At that time, the Wilmington Air Park had approximately 700 employees and four business operations. Today, the Air Park is home to over 3,000 employees and 14 different businesses. And, today, nearly all of the 2.8 million square feet of space is leased.

“We are fortunate to have the opportunity to continue what these individuals started, a decade ago,” said Evers.  “Thank you to everyone who played a role in taking the Air Park from almost empty to within 3,000 square feet of being completely leased today. It’s a tribute to this community, and it’s a tribute to our tenants. I count myself lucky to be here today, standing on the shoulders of the people who took this chance, who took this risk, 11 years ago. We – the current staff and board – are proud of what we have accomplished, but that has only been possible thanks to everyone in the community who played a role over the last decade.”

Many of those who have been involved over the last decade (plus one year) were able to join the small event to reminisce and to remark on the progress.

About the Clinton County Port Authority
The Clinton County Port Authority is a special purpose government formed to operate transportation infrastructure and lead economic development efforts. Designated by the County, City and the CIC as the lead Economic Development agency for the County, it coordinates with the Dayton Development Coalition and JobsOhio to attract jobs to the area.  It owns and operates the Wilmington Air Park, an integrated aviation and logistics business park located on 1,900 acres with nearly three million square feet of industrial, office and hangar space, which was recently named the Best Airport in Ohio. The Port Authority was recognized as one of Ohio’s Best Workplaces in 2020.  Learn more at www.ChooseClintonCountyOH.org.