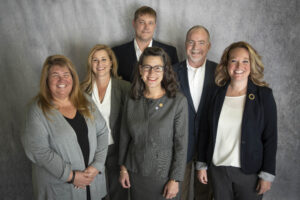 (Wilmington, Ohio) For the second year in a row, the Clinton County Port Authority has been selected by Ohio Business Magazine as a “Best Workplace in Ohio.”

The magazine’s annual program recognizes workplaces in a variety of categories, with the Port Authority recognized as a government entity with fewer than 50 employees. Nominations, which were submitted in May, collected information about employee engagement, benefits, and awards and recognitions. A committee compiled by the magazine selected the winners.

“Receiving this recognition two years in a row is both humbling and flattering,” said Clinton County Port Authority Executive Director Dan Evers. “I believe it is a testament to my colleagues at the Port Authority, and to the vision and support that we receive from the Port Authority Board of Directors.”

In all, 58 Ohio businesses were included in the rankings in categories based on size (companies with fewer than 50 employees, with 50 to 200 employees, and with more than 200 employees) and type of business (public, private, nonprofit, and government). The Clinton County Port Authority was the only business recognized in Wilmington, and one of only three government entities recognized. The statewide winners included businesses in retail, professional service, healthcare, dining, personal care, and entertainment in the greater Dayton and Cincinnati areas.

“I’m so honored be to part of a team who has achieved this award two years in a row,” said Jennifer Klus, Economic Development Director for the Port Authority. “I think it speaks volumes about the collaborative environment in Clinton County and the dedication of my colleagues at the Port Authority.”

As stated in the Ohio Business Magazine article announcing the winners, “Many things changed last year, including what even constitutes a workplace…and several factors that contribute to a great workplace – in-person team events, welcoming offices and fun amenities – had to be reimagined.” However, noted the magazine, the sixth annual “Best Workplaces in Ohio” award “reminds us that Ohio is still a great place to work.”

The Summer edition of the magazine is being distributed now, and highlights many of the companies and institutions recognized as Best Workplaces. “We’re fortunate to have an environment here where collaboration and innovation are encouraged,” noted Evers. “We try to bring that same attitude and action to our community, clients, and partners on a daily basis.”

About the Clinton County Port Authority
The Clinton County Port Authority is a special purpose government formed to operate transportation infrastructure and lead economic development efforts. Designated by the County, City, and the CIC as the lead Economic Development agency for the County, it coordinates with the Dayton Development Coalition and JobsOhio to attract jobs to the area. It owns and operates the Wilmington Air Park, an integrated aviation and logistics business park located on 1,900 acres with nearly three million square feet of industrial, office and hangar space, which was named Best Airport in Ohio in 2020. Learn more at www.ChooseClintonCountyOH.org.