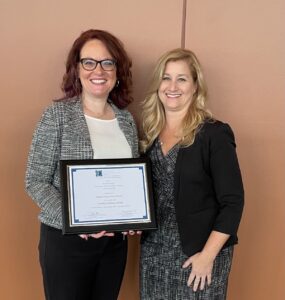 “We are incredibly honored to receive this recognition from the IEDC,” said Clinton County Port Authority Executive Director Dan Evers. “It is a testament to the energy and creativity our team brings to our community engagement efforts, and I’m extremely proud of the work of my colleagues on this initiative.” The honor was presented Tuesday at an awards ceremony during the IEDC Annual Conference, which was held in Nashville, Tennessee.

“We saw EDW2021 as an opportunity to engage with the public about the role Economic Development plays in a variety of facets of the life of the community,” said Jennifer Klus, Economic Development Director with the Clinton County Port Authority, “work that includes a broad range of activities to attract, create, and retain jobs, and to foster a resilient, pro-growth tax base and an inclusive economy.”

“The winners of IEDC’s Excellence in Economic Development awards represent the best of Economic Development and exemplify the leadership that our profession strives for every day,” said 2021 IEDC Board Chair and Invest Buffalo Niagara President and CEO Tom Kucharski. “We’re honored to recognize more than 100 communities whose marketing submissions, projects, and partnerships have improved regional quality     of life.”

IEDC’s Excellence in Economic Development Awards recognize the world’s best economic development programs and partnerships, marketing materials, and the year’s most influential leaders. Twenty-five award categories honor organizations and individuals for their efforts in creating positive change in urban, suburban, and rural communities. Awards were judged by a diverse panel of economic and community developers, following a nomination process held earlier this year. IEDC received over 500 submissions from four countries.

The Clinton County Port Authority is a special purpose government formed to operate transportation infrastructure and lead economic development efforts. Designated by the County, City, and the CIC as the lead Economic Development agency for the County, it coordinates with the Dayton Development Coalition and JobsOhio to attract jobs to the area. It owns and operates the Wilmington Air Park, an integrated aviation and logistics business park located on 1,900 acres with nearly three million square feet of industrial, office and hangar space, which was named Best Airport in Ohio in 2020. Learn more at www.ChooseClintonCountyOH.org.

About the International Economic Development Council

The International Economic Development Council (IEDC) is a non-profit, non-partisan membership organization serving economic developers. With more than 5,000 members, IEDC is the largest organization of its kind. From public to private, rural to urban, and local to international, IEDC’s members engage in the full range of economic development experiences and are employed in various settings, including local, state, provincial, and federal governments, public-private partnerships, chambers of commerce, universities, and a variety of other institutions. Learn more at www.iedconline.org.