Demographics have a major impact on corporate site location decisions.  Regions that are large and growing population base, have a younger, more educated workforce and less poverty are more attractive for economic investment.  Looking at a comparison of Michigan, Missouri, North Carolina, and Ohio offers insights on the competitiveness of these rural markets for corporate site location projects.  Rural counties in these states constitute 56 counties in Michigan with 2.39 M people, 104 rural counties in Missouri with 2.4 M people, 77 counties in North Carolina with just 4.4 M people, and 64 counties in Ohio constituting 4.2 M people.  All four states reviewed offer a large population base in rural markets offering opportunities for corporate site location projects. North Carolina and Missouri are much more rural in nature than competitors Ohio and Michigan.  This is more dramatic related to North Carolina as it is roughly the same population as Ohio and Michigan but has almost double its population base in rural communities compared to these established, Midwest industrial states.  Missouri, which is a smaller state population wise compared to Michigan, North Carolina and Ohio, has a larger share of its population in rural communities and is 20,000 square miles larger than Ohio, 10,000 square miles larger than North Carolina with two urban centers on different edges of the state that spill population into adjoining states. As the chart below outlines, Missouri and North Carolina have a substantially larger percentage of their state’s overall population in rural counties while Ohio is close to the top two states and Michigan has the smallest share of its state population in its rural counties.  Michigan’s smaller rural population base may make rural development challenging in certain communities considering the state of Michigan is the largest of the four sample states being almost 100,000 square miles counting the large Upper Peninsula land mass. 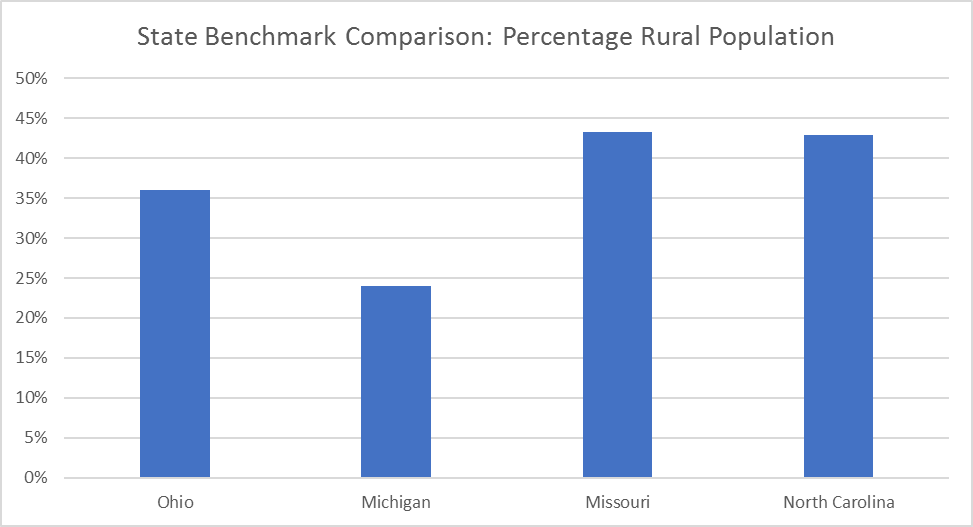 The largest challenge facing rural communities is the loss of population.  As the table below illustrates, rural communities are in large part losing population which is traveling close by to their urban counterparts. Rural North Carolina shows the largest degree of growth over rural Missouri Michigan and Ohio.  However, that is not a major accomplishment.  Rural Ohio lost population from 2010 to 2019 and it appears most of them have moved to the growing urban center in Columbus as this community has grown by 10% during the same timeframe.  Urban centers like Cleveland and St. Louis continue to struggle and are not benefiting from the migration of rural workers.  Rural North Carolina is growing more than the competitor states but is still behind the high-growth metro North Carolina markets driven by substantial growth in the Raleigh-Durham and Charlotte markets.  The rural markets from a population standpoint are struggling as well in Michigan and Missouri and their metro markets are not growing from a population standpoint as quickly as the South and Southwest. Of greater concern for Michigan and Missouri as their larger urban metro centers are not growing at nearly the rate of successful mid-sized urban markets in North Carolina or even Ohio. 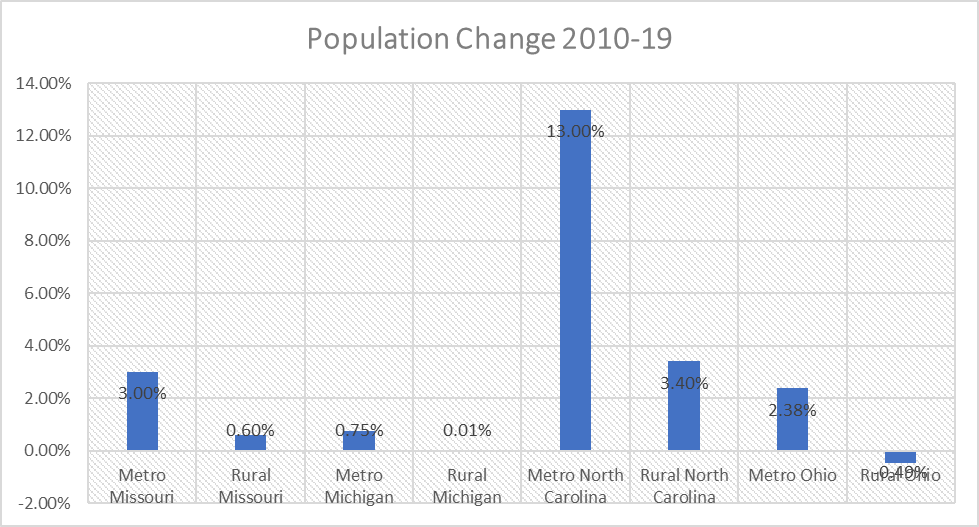 The continued depopulation of rural regions will have a dramatic impact on the economic future of rural communities across the United States.  Not only are rural areas less densely populated, their populations are getting older, on average, due to both outmigration of younger people, and, in some cases, older adults retiring to rural areas.  As of mid-2018, those 65 and older make up almost a quarter of the population in nonmetro areas, and prime working-age adults, 25 to 54 years old, comprise only 43 % of the population.  That compares to a 50 % share of prime working age adults and 19 % of adults 65 and older in metro areas.

The overall economic growth in rural communities across America’s is on-par with large, legacy cities but they are not growing at the same rate as the mid-sized urban markets located in the same state.  However, these rural markets are sizable and capable of serving a range of corporate site location projects.  Measures of a region’s Gross Domestic Product (GDP) is the best measure of overall economic growth in a region.  The rural markets in these target states in the aggregate illustrate large economies with

These are substantial economic markets.  In fact, these rural markets are close to the same size of the urban markets of, Cleveland whose MSA’s GDP is $119,327,107,000, the Columbus MSA’s GDP is $114,675,302,000, the Kansas City MSA’s GDP is $120,352,988,000, the St. Louis MSA’s GDP is $152,060,042,000, and the Charlotte MSA’s GDP is $146,813,931,000.  The Detroit MSA has a much larger GDP of $238,679,503,000.  As the table below illustrates, over a 10-year timeframe, counties in rural Ohio are growing economically the faster than rural communities in Missouri and North Carolina.  Rural Michigan has also illustrated strong growth comparable with the growth of the large Detroit metro market.  However, most rural markets are not keeping space are growing their economy at a slower pace than the mid-sized urban markets in their own state at a similar level as the table below illustrates comparing rural Michigan, Missouri, North Carolina and Ohio with urban markets in those states. 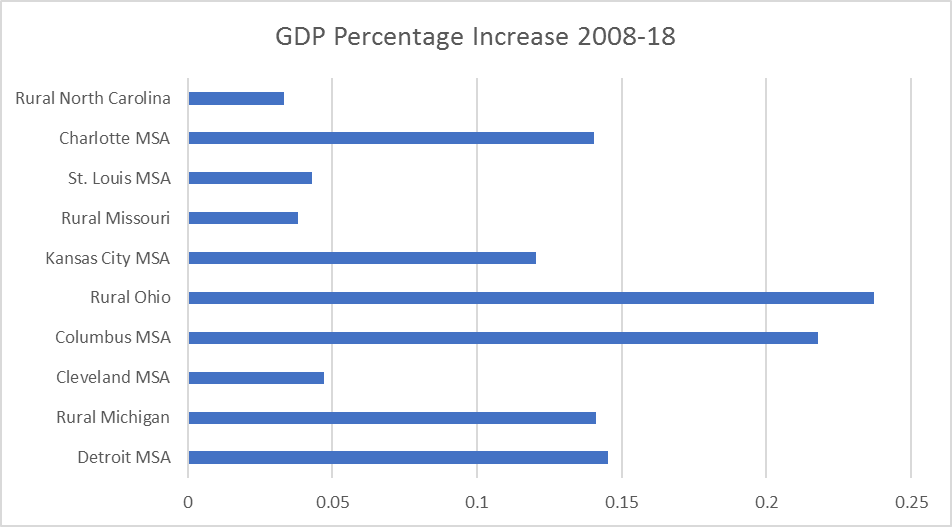 Ohio’s substantial rural development has been driven the last 10 years by the capture of oil and natural gas as part of the shale energy explosion in eastern and southeastern Ohio.

Contact Dave Robinson at the Montrose Group at drobinson@montrosegroupllc.com if you need assistance with any corporate site location or economic development matters.