South and Southwest to Remain Regional Macroeconomic Growth Winners in 2020

While the United States remains a global economic powerhouse, not all regions of the United States are created equally from an economic development standpoint, and the South and Southwest will remain regional macroeconomic growth leaders this year based upon the analysis of the Montrose Group for what trends are apparent for corporate site location in 2020.  Real Gross Domestic Product (GDP) increased in all 50 states and the District of Columbia in the second quarter of 2019, according to the U.S. Bureau of Economic Analysis. The % change in real GDP in the second quarter ranged from 4.7 % in Texas to 0.5 % in Hawaii. 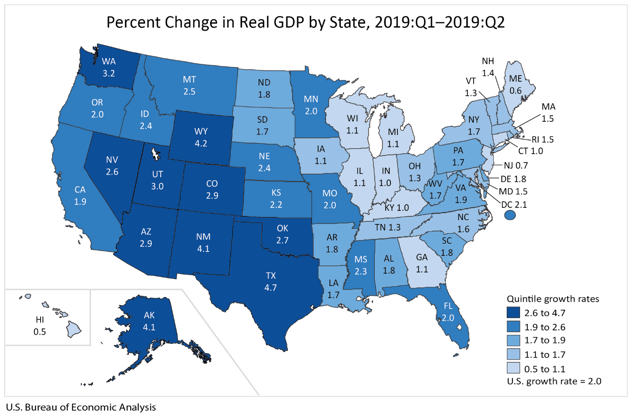 As the table above illustrates, both mid-sized cities and mega-cities (ten largest cities in the United States) illustrate strong private sector job growth in recent years.  The trend of Southern and Southwestern regional growth is strengthened by the table below that outlines regional GDP growth.  This trend is further confirmed when these same regions are compared from a growth in GDP standpoint.  The Southern cities of Nashville, Charlotte, Jacksonville, Dallas, Austin, Raleigh-Durham and Atlanta continue to illustrate substantial economic growth compared to the anemic, high-cost East Coast and many struggling Midwestern Industrial regions. To further illustrate the growth prospects for the Western and Southern states are projections for future job creation in 2020 as outlined in the chart below. 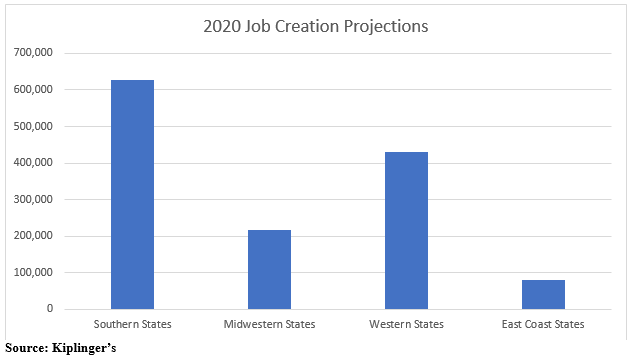 In 2020, economic growth prospects for the Southern states will be driven by continued manufacturing strength and the West Coast success in the tech sector will continue economic success for these regions compared to their Midwestern and East Coast competitors.