A real estate growth and development surge has taken center stage in the City of Cincinnati within the last five years. It’s an exciting story typically illustrated by focusing on the renovations of Over-the-Rhine’s 19th century architecture, and more recently, a decidedly different type of revitalization two miles away, in Uptown Cincinnati.

Uptown Cincinnati is an attractive district with a high-growth economy that includes a healthcare hub, an ecology of advanced research and a pedigreed employment base. The area hosts 45,000 residents living alongside high-growth sectors and world-class academic research employing a total of 50,000 people with an annual economic impact of $11.6 billion.

Despite being home to four of the region’s six largest employers, the five Uptown neighborhoods had long been neglected, but that changed in 2014, when the five anchor institutions decided to revitalize and invest in their home. To do this, the University of Cincinnati, UC Health, TriHealth, Cincinnati Children’s Hospital and the Cincinnati Zoo & Botanical Garden founded the Uptown Consortium (UCI).

Since then, UCI has led the charge by reenergizing the communities, investing over $400 million in projects and advocating for an urban interchange at Martin Luther King Jr. drive. Now that the MLK interchange is opened, UCI looks to the future of the area directly around the new ramps, a blighted, underdeveloped area of Uptown.

The institutions are working to create an Uptown Innovation Corridor that will foster a “work, live, play” environment for innovative companies and groundbreaking research. The Consortium has spent nearly $24 million to assemble the sites around the interchange, partnered with the City of Cincinnati and other local developers, and created a vision for the Corridor. To date, UCI has several confirmed developments for the area, including:

Overall, the efforts by the Consortium has induced over $1 billion in economic development in the region. To learn more about the Uptown Consortium and its projects, please visit uptowncincinnati.com. 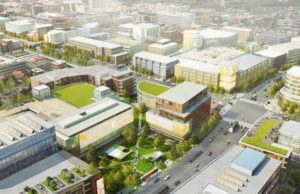