Site Selection ranking is the community’s highest ever 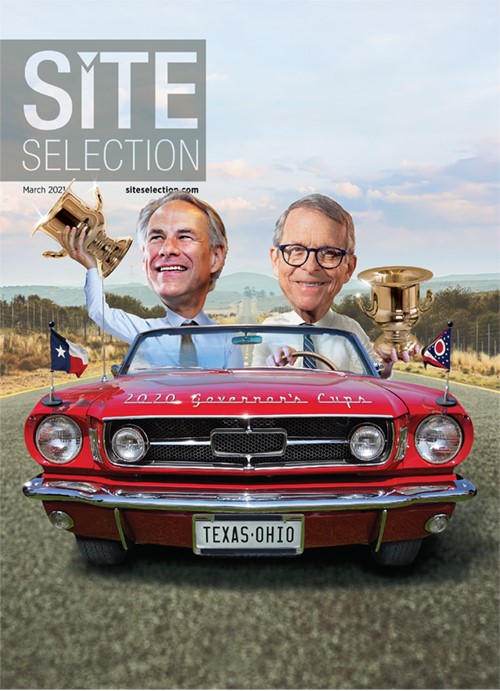 Cover of the March 2021 edition of Site Selection magazine.

TIFFIN, OHIO – MARCH 1, 2021 – Tiffin-Seneca Economic Partnership and the Fostoria Economic Development Corp. jointly announced today that Seneca County has placed No. 4 nationally in Site Selection magazine’s rankings for large, private economic development projects out of the 581 micropolitans in the US. Site Selection has been annually ranking states and cities since 1978 and top non-metro counties with an urban center between 10,000 and 50,000 since 2004.

This is the 10th year in a row that the Tiffin-Seneca micropolitan area has ranked in the top 100 nationally, and the sixth time it has placed in the top 10. In 2020, Seneca County was ranked No. 6. Qualifying projects must involve a capital investment of at least $1 million, create at least 20 new jobs or add at least 20,000 sq. ft. of new floor area.

Tiffin Mayor Aaron Montz was excited to hear the news. “This ranking is further proof of the great things happening here in Tiffin. We are proud to be recognized again by Site Selection Magazine.” Fostoria Mayor Eric Keckler agreed, “I’m proud that Fostoria was again recognized by Site Selection for the continued growth in our community.” Seneca County Commission President Mike Kerschner added: “I’m proud that Seneca County has achieved its highest-ever ranking, and I congratulate everyone who contributed toward this great success.”

“Despite the disruptions of 2020, Tiffin, Seneca County, and all of Northwest Ohio stayed focused in putting the needs of businesses first while continuing to build a conducive climate for their success. And the results of those efforts show in the outstanding rankings in Site Selection magazine,” said Dean Monske, president and CEO of the Regional Growth Partnership.

This year, Ohio and Texas won the Governor’s Cups, Ohio for most projects per capita in 2020 and Texas for having the most qualified projects of any state for the ninth straight year. The entire Northwest Ohio region posted strong numbers, with Findlay and Hancock County taking the number one micropolitan slot. Sandusky County placed seventh, Crawford and Defiance Counties were tied for 55th, Lima tied for 4th place for metropolitans with less than 200,000 population and Toledo tied for first for mid-metropolitans.

More information can be found at siteselection.com.

About the Tiffin-Seneca Economic Partnership
Started in 1983 as the Seneca Industrial and Economic Development Corp. (SIEDC), the Tiffin-Seneca Economic Partnership is a private, non-profit corporation dedicated to driving positive economic, downtown, and community development in Tiffin and Seneca County, Ohio, which consistently ranks among the top communities nationally for economic development. Learn more about the great things going on in Tiffin and Seneca County at www.tiffinseneca.com.

END_OF_DOCUMENT_TOKEN_TO_BE_REPLACED

(Wilmington, Ohio) The Clinton County Port Authority is pleased to congratulate David Riggs, Director of the SBDC at Miami Regionals, for being named Ohio’s SBDC State Star in 2021.

END_OF_DOCUMENT_TOKEN_TO_BE_REPLACED

Tiffin Foundry and Machine to invest in new machinery and equipment

Tiffin Foundry and Machine has announced it will purchase new machinery and hire more staff with assistance from a $50,000 JobsOhio Inclusion Grant. Tiffin Foundry has eight employees in Tiffin, and has an additional operation in North Ridgeville, Ohio.

JobsOhio’s grant, secured with assistance from the Regional Growth Partnership, will support a planned $321,923 in machinery and equipment upgrades and three new jobs. In addition, Tiffin Foundry and Machine worked with Tiffin-Seneca Economic Partnership and OhioMeansJobs – Seneca County on other potential incentives to support the company’s growth.