What You Can Learn from How NASA and SpaceX Market Rockets

a.k.a. Colleen Exposes Her Nerdy Side and Tries to Make it Sound Professional

Back in February, I saw the SpaceX Falcon Heavy launch from Kennedy Space Center near Cape Canaveral, Florida.  I was four miles away from the launchpad, and it was one of the most amazing things I’ve experienced.  That’s not pertinent to this story, but I like to brag about it. 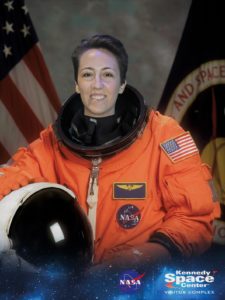 I recently went back to Kennedy Space Center to see a Falcon 9 on display.   While I was there, I talked to a woman about SpaceX and its family of Falcon rockets. She seemed in awe of all that SpaceX is doing to send humans to Mars. What surprised me, though, was her comment that “NASA isn’t doing anything like that.” NASA has actually developed the Space Launch System (SLS) heavy-lift rocket for human deep-space travel. In fact, we were standing mere feet from the Orion spacecraft — the crew vehicle that will sit atop the SLS like Apollo sat atop the Saturn V. She had no idea.

It got me thinking about how differently SpaceX and NASA market a similar project. Namely, how SpaceX markets the heck out of it and NASA… doesn’t.

Marketing isn’t about having something unique but rather making what you have sound unique.  In economic development, it can be easy to compare your assets to those of your competitors and say, “We all have essentially the same thing.”  Almost every technical school offers welding.  Almost every community is within a day’s drive of x number of people.  Just the other day, I asked someone about their incentives and they said, “They’re the same ones everyone else has.”

A few years ago, a community ran an ad offering a “$1 million reward” for a new project.  The “reward” was up to a million dollars in incentives for a project that brought a certain number of jobs to the community.  Other communities had the capacity to give the same amount of incentives, but no one else marketed it as a “$1 million reward.”  That’s where creative marketing came in.  They made something common sound unique.

The communities that succeed are typically those that never stop telling their story.  They aggressively market using a strong media mix – a variety of marketing methods that cover a varied audience – to push their targeted message.  The success doesn’t always lie in what you have, but rather what people see you as having.

Follow Colleen on Twitter and LinkedIn for dry humor,
marketing insights, and photos of her in the airport.

She’ll also talk to you about rockets.
You know, if that’s something you’re into.

← Pipeline H2O Fostering the Next Wave of Water Technology What Takes Priority – A TIF Exemption or Another Exemption? The Ohio Supreme Court Weighs In →