The new construction within the National Road Business Park was completed at the end of November in Eastern Muskingum County. This Project has created a 3,300 linear foot access, ending in a 55’ diameter cul de sac at the southern end where the park’s large 75 acre site is located. It also extended an 18” force main sewer line to the southern end of the site and provided water line upgrades and extensions. The formation of the County’s fourth business park was a cooperative effort between the Muskingum County Commissioners, the City of Zanesville, Perry Township, and the Zanesville-Muskingum County Port Authority.  Assistance from JobsOhio, ODOT Jobs and Commerce and OhioSE have been vital to the overall scope of the project and finalization of this new addition.  The ZMCPA, Muskingum County Commissioners, City of Zanesville and Perry Township Trustees have entered into a JEDD agreement. This cooperative planning has allowed for future maintenance of the roads, both with allocations to Muskingum County and Perry Township. The creation of the JEDD will create new revenue for the ZMCPA, City of Zanesville, Muskingum County and Perry Township to be reinvested into the National Road Park and other economic development activities. The National Road Business Park will provide a competitive edge for our community in recruiting new business and industry. The Greenfield site features all necessary utilities, direct access to Interstate 70 and is located less than a mile to the Zanesville Municipal Airport.  Sites within the park vary from 5 acres to 203 acres and more information can be found at www.zmcport.com. 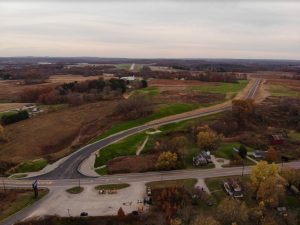 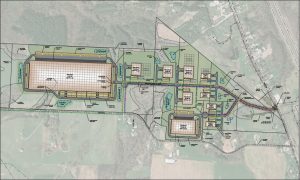