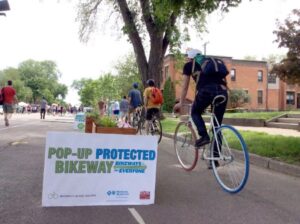 “Try-it before you buy-it” concept has been disrupting the decision process. A pop-up community project allows you to “test drive” placemaking concepts and get community feedback and buy-in before spending a lot on a permanent installation.

Pop-ups are an easy way for communities to test new ideas and where temporary installations can become permanent destinations which build vibrant communities. Local residents and the city government can try out new public spaces before investing more funding to buy or enhance it for the community long-term.

Note – This piece was updated and modified in September 2022 from this blog post.

Excitement is Growing for the Digital Futures Building’s Official Opening

When the Digital Futures building officially opens to the public on September 23, the greater Cincinnati region will be one step closer to creating a world-class innovation district in Uptown Cincinnati. The highly anticipated building provides a transdisciplinary space to bring together University of Cincinnati (UC) experts for collaboration that will impact the community, region and global society.

END_OF_DOCUMENT_TOKEN_TO_BE_REPLACED

The $1.5 million dollar facility was constructed in the current patio area of the Antwerp school building and provides an advanced, state-of-the-art, multi-purpose learning space for students. The high-tech facility will be the most advanced learning space in any public school in this part of the state. According to a statement by Antwerp Local Schools Superintendent Martin Miller, “The Antwerp Board of Education, administration and staff are committed to being responsive to the changing landscape of education and finding ways to most appropriately prepare our students. Teaching and learning has changed significantly in recent years.