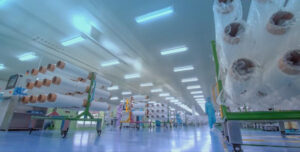 The facility will make separator film, a key component in batteries for electric vehicles (EVs). SEMCORP’s products will be used by leading EV battery makers across North America.

SEMCORP chose the Sidney location because of Ohio’s “impressive commitment to vocational-career education, preparedness for a large-scale project like ours, the strong work ethic in the region and proximity to key customers,” said James Shih, SEMCORP’s group vice president of global projects.

“SEMCORP’s advanced battery separator film will help propel Ohio to the forefront of the electric vehicle industry,” JobsOhio President and CEO J.P. Nauseef said. “Our team of professionals, including the Dayton Development Coalition, the Sidney-Shelby Economic Partnership, the city of Sidney and Shelby County, worked tirelessly to demonstrate why Ohio is the best location for this investment.”

The facility will be located at Sidney Ohio Industrial Park at Millcreek and Kuther Road, a site authenticated by JobsOhio’s SiteOhio program in 2021. The authenticated site status ensures the site is free of any detriments that may slow or stop development.

Jim Hill, executive director of the Sidney-Shelby Economic Partnership, said SEMCORP will join “a long list of innovative, world-class manufacturing companies” in Shelby County. “As the global leader in separator film production, SEMCORP will play a vital role in meeting the growing demand for electric vehicle batteries in North America,” Hill said. “This project is a big win for Sidney, Shelby County, the Dayton region and the entire state of Ohio.”

“SiteOhio Authentication was a key factor in landing this project,” added Hill.  “The SiteOhio program helped prepared us and differentiate us with the competition.  When electrical vehicle projects began to emerge in the U.S., we were ready to clearly communicate our value proposition to site seekers in the EV supply chain,” said Hill.

Sidney City Manager Andrew Bowsher said they are “excited and humbled” by the opportunity to work with SEMCORP on their future expansion into Sidney and Shelby County. Both the city and county previously approved incentives for the project at recent meetings.