Consumer products and the infrastructure upon which they operate increasingly have the ability sense their surroundings, communicate with other devices and people, and to draw on the computing and storage power of the cloud and connected to the Internet. IoT is a network which connects multiple smart devices enabled with software and network connectivity and exchange information between each other and with the server. IoT is a billion-dollar market and is growing continuously driven by technology’s integration into manufacturing, Smart Community development, and connectivity of consumer products to the digital age. A study shows that by the end of year 2020, there will be more than 30 B connected devices on the information grid and the market size will be double the size of pc, smartphone and connected cars and wearable’s market with the global IoT market expected to grow in the US to $2488 Billion by the end of 2022.   Global Autonomous Vehicle market revenue, based on the sensors, hardware, software, services, and autonomous vehicles types, is expected to grow 39.6% during 2017-2027 reaching $126.8 B by 2027. Illustrating the strength of this market are billion dollar investments made by Ford, General Motors and Honda to, in some cases, jointly develop the technology needed to spur the wide spread adoption of fully self-driving vehicles.

A Smart Community initiative creates an opportunity for a local government to use the IoT to create safer streets, better flow of traffic and overall more efficient delivery of public services and public utilities. A successful Smart Community program can create positive economic results for a region.  The positive impact of smart community technologies on economic development could see local communities locking in incremental growth of over 5 % and driving more than $20 T in additional economic benefits over the coming decade based upon a recent study.   Economic benefits of developing Smart Community’s is anticipated from several areas, including:

Above the data management platform resides a robust set of applications, developed in the public or private sectors that create value on top of collected data. While these applications may be initially focused on municipal handling of data, integrating across local government resources, it is expected that consumer and business applications will leverage this abundance of data in the future and create applications that enhance perceived value and lay the groundwork for establishing revenue opportunities in the future. The intersection between city collection and management of data with these three areas has the potential to dramatically increase the value proposition associated with Smart Community investments. 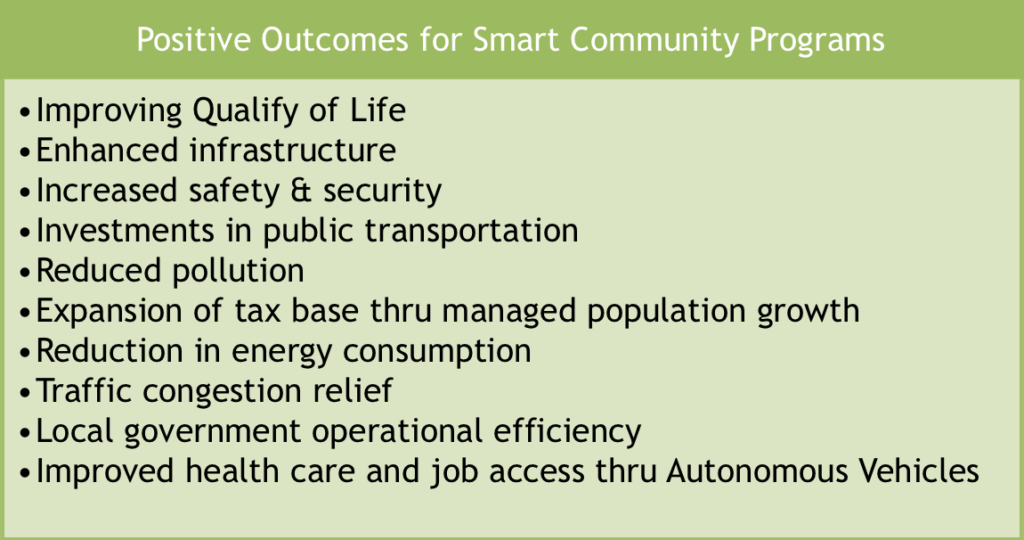 2019 will see cities, counties, townships and states launching Smart Community programs involving three common elements: information and communication technologies that generate and aggregate data; analytical tools which convert that data into usable information; and organizational structures that encourage collaboration, innovation, and the application of that information to solve public problems. Smart Community programs will first unlock the potential for IoT and AVs through a Smart Community program by gathering data from a range of local government and relevant private sector sources.  Gathered data is then housed in an Integrated Data Exchange (IDE) computer software platform.  IDE is a dynamic platform that integrates data from deployed smart technologies and community partners offering an open-source information portal intended to facilitate better decision-making and problem solving for all users.

Communities looking to capitalize on the development of new IoT applications and the expansion of self-driving vehicles have many benefits to gain through the creation of a Smart Community program.  Many states and regions are adopting Smart Community programs including: Ohio Department of Transportation’s Drive Ohio program developing state transportation programs to foster the use of AVs; state small cell legislation creates a process for cities to permit new wireless telecommunications networks to be developed to spur the implementation of 5G technology; Smart Columbus is implementing a local transportation program focused on improving the lives of everyday residents through technology, Chicago is launching an Array of Things program to operate a local sensor network to provide government services, and the Dallas West End project is addressing the challenges of a struggling neighborhood through technology.  2019 will see the launch of new and impressive Smart Community programs across the United States to join these successful efforts.

Government is rarely an early adopter of technology but IoT and AVs will drive local and state governments to catch up with the private sector adoption technology to address local challenges.