Governor Mike DeWine appears in a very strong position in his bid for re-election holding a 49%-36.5% lead over Democrat Nan Whaley.  Governor DeWine is clearly benefiting from his long tenure in public office, strong economic performance in the state as illustration of the recent Intel facility announcement in Central Ohio and his cross-party appeal. 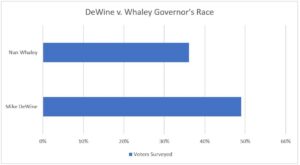 Matched with the general Republican orientation of the state, the Governor’s endorsement by President Trump and a substantial fundraising leader, Governor DeWine appears to be in a strong position for re-election.

The race for Ohio’s U.S. Senate race is not so clear.  46.1% of those voters surveyed support Congressman Tim Ryan while 43.1% support author and venture capitalist J.D. Vance.  10.9% of the voters in the Senate race survey are unsure or didn’t provide an answer.  The lead Congressman Ryan has with voters right now is clearly the result of a well-run campaign that jumped into action the day after the Primary Election. J.D. Vance’s campaign on the other hand was slow to reach out to General Election voters.  Republicans are redoubling efforts including a planned visit by former President Trump in the new found Republican stronghold of the Mahoning Valley and a reported $28M in planned campaign spending by the U.S. Senate Republicans.  The Ryan-Vance race is likely to be one watched nationally and by Ohio voters. 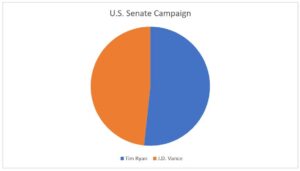 Recent national economic challenges are at the top of minds of most Ohio voters surveyed.  The economy and its cost of living was the major issue of concern with Ohio voters gathering 32.5% while abortion came in second with 15.5% and crime and violence finished third at 13.9%.

Furthermore, 48.7% of the voters surveyed felt their household income was falling behind while 14.5% felt it was doing better and 34.9% felt it was about even.   While the cost of living and inflation are top matters of concern for Ohio voters, Ohioans appear satisfied with the state’s quality of life, tax, and Medicaid policies and the use of economic development incentives to support job creation and the promotion of workforce housing. The Montrose Group Opportunity Ohio 2022 Poll also found:

Public education funding remains a major topic for state government leaders.  Ohio voters also appear ready to shift the public education funding formula with 57% in favor of a policy that would allocate funds for school funding, so it follows the child whether they attend a public, charter or private school. Currently, traditional public-school districts receive a larger share of government funding than public charter schools and private schools.

Abortion, with the recent U.S. Supreme Court decision shifting the authority to regulate abortions back to the state governments, is of course a hot topic with Ohio voters.  A majority of the voters surveyed favor allowing abortions in Ohio with some exceptions or oppose allowing abortions in Ohio under any circumstances.  Based upon these survey results, Ohioans are searching for a middle ground on abortion that does not permit abortion on demand but also does not prohibit all abortions under any circumstances. 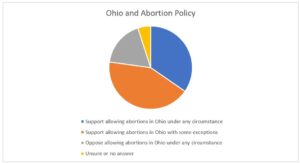 Fallow Research and Communications conducted the Montrose Group Opportunity Ohio 2022 Poll.  This survey research data was gathered through live telephone interviews and secure SMS-text based surveys conducted with 600 voters registered to vote in Ohio with histories of voting in recent even-year November elections and recent new registrants, who had valid residential, VOIP or cellular telephone numbers. The interviews and surveys were completed during the period of September 6, 2022 through September 11, 2022. The overall estimated margin of sampling error is +/- 4 percent, based on a confidence level of 95 percent, although it varies for each individual question. This means that if this survey were repeated, 95 times out of 100 the results would be within plus or minus 4 percent of those provided herein. Some adjustments were made to weight the results toward estimates of demographic and geographic characteristics of the state’s general electorate, in order to account for under- and over-sampling that normally occurs as a result of the random selection process, and to ensure that all major sub-groups are represented in proportion to their actual percentages. Like all polls, this opinion survey research is subject to other possible sources of error, such as unintentional bias in the wording of questions, data-entry error and nonresponse bias.