The Newark Arcade Project, a Montrose Group client, was one of 13 projects awarded the highly competitive Ohio Transformational Mixed Used District (TMUD) tax credit by the Ohio Tax Credit Authority on March 2, 2022.  The Ohio Tax Credit Authority approved these awards as part of the $100 million first round of the state’s new TMUD Program. The Ohio Department of Development reported there were $417 M worth of applications. 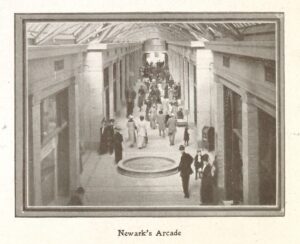 Designed by Howell & Thomas of Columbus, the Newark Arcade was constructed 1908-09 to serve as one of eight glass-ceilinged shopping centers built in Ohio. The city-block-long Newark Arcade, once known as the Arcade Mini Mall, is located between Third and Fourth Streets in Downtown Newark.  Newark Development Partners CIC purchased the Newark Arcade in 2019 and plans to transform the Newark Arcade into a mixed-use development with 25,000 sq. feet of space leased for retail and office tenants, 10,541 square feet of space for Winter Farmer’s Market, Community Events and special events, and 15,795 square feet to be developed into 19 apartments.  The Newark Arcade was awarded over $1.5 M in TMUD tax credits to match the $10M in private fundraising and federal and state historic tax credits which will cover the $17 M in redevelopment costs.

The next ODOD round of applications for the TMUD tax credits are expected to be released in the coming months.  Competition for TMUD funding will remain fierce as urban and rural regions struggle to meet surging housing demands.  Please contact Dave Robinson at drobinson@montrosegroupllc.com if you have any questions about the TMUD tax credit program or other economic development or lobbying matters.