The City of Strongsville was recently successful in securing $1.6 Million in support through the help of Congressman Anthony Gonzales and U.S. Senator Sherrod Brown in federal community project funding to upgrade and replace outdated stormwater infrastructure, which impacts homeowners, drivers, and businesses along Prospect Road.

These funds were made possible through action taken by Congress, which appropriated federal community project funding in the most recent federal appropriations legislation for the fiscal year 2022. Last year led by the U.S. House of Representatives, Congress brought back federal budget earmarks to fund community projects ending a decades-long break on the process of member-directed spending in federal appropriations bills. In the Ohio Congressional Delegation, all members except Congressman Jordan, Davidson, and U.S. Senator Rob Portman submitted projects for consideration.

Federal budget earmarks are a Congressionally directed spending priority in which the Congress directs a federal agency to spend a portion of their budget from a specific program on a community project such as infrastructure for roads, water and sewer projects, research and development, and health care projects.  The requests are directed typically through a local member of Congress, but they must be accepted by one of the following U.S. House Appropriations Subcommittees prior to adoption by the full House Appropriations Committee, House Rules Committee, and then the U.S. House of Representatives. The process works in a similar fashion in the U.S. Senate except the earmarks work their way through the Senate Finance Committee. 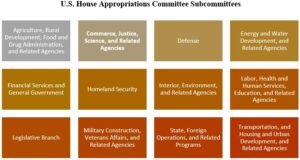 On the heels of the success of the recently signed federal appropriations bill, which included community project spending, House Appropriations Chair DeLauro recently issued guidance to members for the upcoming FY 2023 cycle for submitting congressional earmark requests. The next round of project submissions opens April 4th through April 30th.

The process announced last year largely remains the same with a few changes for the next round. Previously members of Congress were limited to submit a maximum of ten projects for consideration for funding. In the FY 23 round members will now be permitted to submit a max of 15 projects. Additionally, members are required to post each project they submit for funding in a publicly accessible place along with a declaration certifying they do not have a financial interest in the project. This requirement is modified slightly to require posting the information between 15-20 days after submission instead of the immediate posting requirement from previous guidance. This change is being made to provide staff with the necessary time for project review to ensure each project is properly categorized as a Community Project funding request.

Below are the project qualifying rules and guidance:

All Requests Online: Members are required to post every Community Project Funding request online in the time period between 15 and 20 days following the submission to the Committee through an online portal.

Early Public Disclosure: To facilitate public scrutiny of Community Project Funding, the Committee will release a list of projects funded the same day as the Subcommittee markup, or 24 hours before full committee consideration if there was no Subcommittee markup.

No Financial Interest: Members must certify to the Committee that they, their spouse, and their immediate family have no financial interest in the projects they request.

Ban on For-Profit Recipients: There is a ban on directing Community Project Funding to for-profit grantees, but the earmarks may request funding for State or local governments or non-profits.

Cap on Overall Funding: The Committees will limit Community Project Funding to no more than 1 percent of discretionary spending.

Member Requests Capped: The Committee will accept a maximum of 15 community project requests from each member, though only a handful may actually be funded.

Mandatory Audit: The Committees will require the Government Accountability Office to audit a sample of enacted community project funding and report its findings to Congress.

Demonstrations of Community Engagement: Members must provide evidence of community support that were compelling factors in their decision to select the requested projects. This policy was recommended by the bipartisan House Select Committee on the Modernization of Congress.

Existing Standards: These reforms build on the requirements for accountability and transparency that are part of Rule XXI, clause 9 and Rule XXIII, clauses 16 and 17 of the Rules of the House. Those existing rules require the following:

No Member Financial Interest: The rules forbid any member from pursuing Community Project Funding to further his or her financial interest, or that of his or her spouse. Each member requesting Community Project Funding must certify in writing that there is no such interest and make that certification available to the public. As noted above, the new Committee reforms will expand this requirement beyond existing House rules.

Request in Writing: Any member requesting Community Project Funding must do so in writing, including the Member’s name, the name and location of the intended recipient, and the purpose of the spending item.

Committee Consideration: When reporting legislation containing Community Project Funding, the Committee is required to identify each item (including the name of each Member requesting the item) in the corresponding committee report or joint explanatory statement and make it publicly available online in a searchable format.

Disclosure Before Floor Consideration:  The rules prohibit a vote on a bill or a vote on adoption of a conference report, unless the chair of the committee, certifies that a complete list of Community Project Funding has been publicly available for at least 48 hours.

Point of Order Against New Projects in Conference Reports: A point of order may be raised against a provision of the conference report if it includes Community Project Funding that was not included in either the House or Senate bills.

Please contact Dave Robinson at the Montrose Group at drobinson@montrosegroupllc.com if you are interested in assistance with advocating for a federal budget earmark project.