Ohio offers a range of tax incentives and public finance tools to develop residential projects.  These tools range from tax abatements to tax credits to sales tax exemptions to grants and loans to infrastructure funding.

Community Reinvestment Act Tax Abatements.  Ohio law authorizes local governments to provide property tax abatements on new investments up to 100% through the Community Reinvestment Area (CRA) program that does not require local school board approval for districts created before 1994.  The Ohio CRA program is an economic development tool administered by municipal and county governments that provides real property tax exemptions for property owners who renovate existing or construct new buildings. CRAs are areas of land in which property owners can receive tax incentives for investing in real property improvements.  The program is delineated into two distinct categories, those created prior to July 1994 (“pre-1994”) and those created after the law changes went into effect after July 1994. The Ohio CRA Program is a direct incentive tax exemption program benefiting property owners who renovate existing or construct new buildings.  This program permits municipalities or counties to designate areas where investment has been discouraged as a CRA to encourage the revitalization of the existing housing stock and the development of new structures. Local municipalities or counties can determine the type of development to be supported by the CRA Program by specifying the eligibility of residential, commercial and/or industrial projects.

The exemption percentage and term for commercial and industrial projects are to be negotiated on a project-specific basis. If the proposed exemption exceeds 50%, local school district consent is required unless the legislative authority determines, for each year of the proposed exemption, that at least 50% of the amount of the taxes estimated that would have been charged on the improvements if the exemption had not taken place will be made up by other taxes or payments available to the school district. Upon notice of a project that does not meet this standard, the board of education may approve the project even though the new revenues do not equal at least 50% of the projected taxes prior to the exemption.

New Community Authority (NCA). A new community authority or “NCA” is a special unit of government authorized under Chapter 349 of the Ohio Revised Code.  NCAs permit landowners to create a special assessment known as a Community Development Charge to finance and construct community facilities that include any kind of public improvement within the district and include facilities that are used in furtherance of community activities such as cultural, educational, governmental, recreational, residential, industrial, commercial, distribution and research activities. 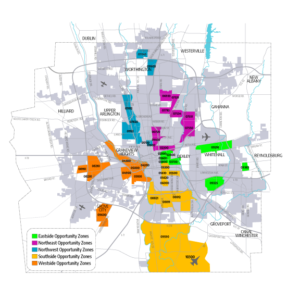 Ohio Sales Tax Exemption.  Ohio port authorities are permitted to offer a sales tax exemption on construction materials used for economic development projects. An Ohio port authority such as the Columbus-Franklin County Finance Authority issues taxable bonds to finance the project, they hold the title to the building and enters into a long-term lease with the client (typically five years), the bonds may be purchased by the client’s bank or a related entity of the client itself, the port authority could place the bonds in the capital markets, at the end of the lease term, the building’s title would be transferred to the client for a nominal amount, and the client would be viewed as the building’s owner for federal tax purposes and therefore would be able to take depreciation on the building.

Special Improvement Districts.  Ohio’s Special Improvement Districts (SID) permit property owners in a defined area through a majority vote to create a special assessment to fund area public infrastructure improvements and provide services. A SID is established when owners representing 60% of the front footage or 75% of the land area of the district sign a formal petition to establish it. Services must be for the public good and may include maintenance, physical improvements, cleaning, and additional safety among a variety of activities. The services are chosen by the property owners themselves, through a Board of Directors, and cannot replace city services.

Ohio Prohibition Against Local Government Rent Control. In response to a ballot initiative proposed in the City of Columbus, the Ohio General Assembly recently enacted state legislation to provide a statewide prohibition against local rent control ordinances and regulations. The General Assembly amended Ohio’s landlord and tenants law applying to all local government political subdivisions—townships, cities and counties to prohibit rent control or rent stabilization ordinances and regulations adopted by political subdivisions unless the property is owned by the political subdivision, or such regulating is related to voluntary agreements or incentives to increase or maintain the supply or improve the quality of available residential premises to promote affordable housing provided under LIHTC or similar programs or where, in return for granting some type of tax abatement or credit, the city requires, and the owner agrees, to limit rents.  The new law defines “Rent control” as “requiring below-market rents for residential premises or controlling rental rates for residential premises in any manner;” “rent stabilization” is defined as “allowing rent increases for residential premises of a fixed amount or on a fixed schedule as set by a political subdivision.”

Ohio offers a wide range of economic development incentive programs designed to encourage the development of housing throughout the Buckeye State.