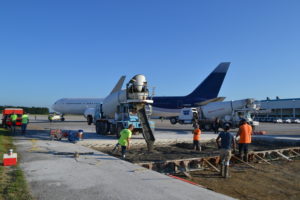 (WILMINGTON, OHIO) The Clinton County Port Authority (Port Authority) received a Notice of Project Approval (NPA) indicating that it has successfully secured grant funds from the Ohio Department of Transportation (ODOT) FY2020 Ohio Airport Grant Program. These funds will be leveraged with Port Authority funds to complete repairs of concrete infrastructure on Taxiway A and Taxiway C, as well as replace lighted signs along Runway 22R/4L.

“ODOT Aviation has offered consistent support of the Wilmington Air Park’s capital investment program, enabling continued rehabilitation of infrastructure and other aviation equipment,” said Port Authority Executive Director Dan Evers. “Growing operations at the airport, both in air cargo and in the MRO, make this investment essential. We’re grateful for the continued partnership of ODOT Aviation.”

The grant funds awarded represent three proposed projects. ODOT Aviation grant funds address an estimated $465,750 in repairs, replacements and improvements. The State will fund 79 percent of the cost of the projects, up to a maximum of $367,943. The balance of the funding for each project (not less than 21 percent) will be invested by the Port Authority, in addition to costs not covered by the ODOT Aviation Grant program.

ODOT Aviation announced project awards, through its competitive grant program, to airports throughout Ohio. The total grant funding awarded by ODOT Aviation is estimated at $4.8 million. Projects funded include rehabilitation/repair of airport runways, aprons, and lighting, as well as airport obstruction removal. The Port Authority submitted four projects for consideration for funding in fiscal year 2020 and secured funding for three of them. The Wilmington Air Park was one of only three airports in the state to receive multiple project award notices.

“We believe we have a thoughtful, strategic infrastructure investment program at the Wilmington Air Park, and working with our airport engineering firm, Michael Baker International, and with LGSTX Services, we are prioritizing those projects that need to be undertaken to ensure high-quality cost-effective and safe operations for  the Air Park’s tenants and other aviation users. We’re grateful, and proud, that ODOT Aviation has awarded the Port Authority grant funds toward multiple projects for the second year in a row. It’s our belief that this validates the value of the Air Park to aviation statewide, our prioritization process, and our collective team’s ability to execute these projects effectively” said Evers.

While preliminary work on the plans and pricing will commence soon, these project work will be completed in 2020.

The Ohio Airport Grant Program provides financial assistance to publicly owned airports in the state that do not receive FAA passenger or air cargo entitlements.  Grants may be used for airport obstruction removal, pavement marking, lighting rehabilitation, and pavement rehabilitation/resurfacing.

The Clinton County Port Authority is a special purpose government formed to operate transportation infrastructure and lead economic development efforts. It owns and operates the Wilmington Air Park, an integrated aviation and logistics business park located on 1,900 acres with nearly three million square feet of industrial, office and hangar space. Collaborating with the Board of County Commissioners and other partners on Economic Development matters, the Port Authority markets properties and manages programs available to the entire community.   Learn more at www.wilmingtonairpark.com