Companies considering a corporate site location project will first determine if the nation under consideration is growing from an economic perspective.  Measures of a nation’s Gross Domestic Product (GDP) is the tool used to determine whether this nation is growing.  GDP is the monetary value of all the finished goods and services produced within a country’s borders in a specific time period and includes anything produced by the country’s citizens and foreigners within its borders. 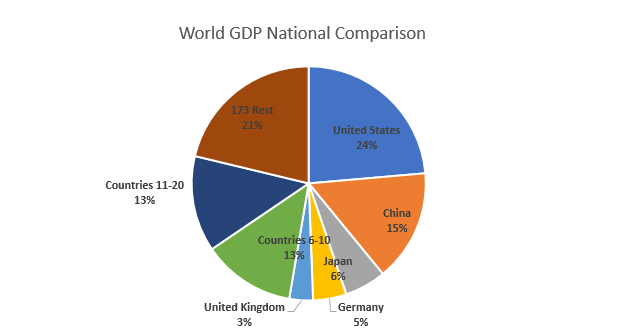 From a national perspective, the United States will remain the dominant global economy.  According to Investopedia, the U.S. has retained its position of being the world’s largest economy since 1871. The size of the U.S. economy was at $20.49 T in 2018 in nominal terms and is expected to reach $21.35 T in 2019. The U.S. is often dubbed as an economic superpower and that’s because the economy constitutes almost a quarter of the global economy, backed by advanced infrastructure, technology, and an abundance of natural resources.  The gap between the size of the world’s two largest economies in terms of nominal GDP is expected to lessen by 2023; the U.S. economy is projected to grow to $24.81 T by 2023, followed closely by China at $19.71 T.

According to the St. Louis Federal Reserve Bank, after showing considerable strength in the first quarter of 2019, the pace of real GDP growth has since slowed modestly. Labor market conditions remain healthy, as the number of job openings continues to outpace the number of unemployed people. By contrast, inflation has remained low. Although the U.S. economy is exhibiting trend-like growth, many businesses continue to face brisk headwinds related to the trade tussle with China and slowing global growth. The consensus of professional forecasters is that real GDP growth will dip below 2% in 2020 and that inflation will modestly firm closer to the Fed’s target rate. But if the headwinds facing the economy diminish, then modestly stronger growth is possible in 2020.  The United States economic growth will likely out-perform Europe, with estimated growth at 1.8%, China is likely to slow growth to below 6%, and Japan will continue its economic struggles with growth projected in 2020 below 1%.

According to the US Bureau of Labor Statistics (BLS), employment is projected to grow by 8.4 M jobs to 169.4 M jobs over the 2018–28 decade, in the U.S. This expansion reflects an annual growth rate of 0.5 %, which is slower than the 2008–18 annual growth rate of 0.8 %. An aging population and labor force will contribute to changes expected over the coming decade including a continued decline in the labor force participation rate and continued growth in employment in healthcare and related industries and occupations. Real GDP is projected to grow at much the same rate from 2018 to 2028 as it did in the previous decade; labor productivity is projected to accelerate slightly from the previous decade to an annual rate of 1.6 %, higher than the previous decade’s annual rate of 1.3 %.

In addition, the United States has long maintained a dramatic advantage in growing and developing companies in a variety of technology related industries.  The basis for much of this growth is the American venture capital marketplace that provides the funding these early-stage companies need to succeed.  As the recent PwC/CB Insights MoneyTree Report indicates, North America, driven by the United States, has a long-term dominance over Europe and Asia when it comes to venture capital funding of technology startups.  There is no reason for this to change entering 2020.  In the first three quarters of 2019, venture capital investments in the United States totaled more than Asia and Europe combined.

More importantly, economic data released during the last week of December 2019 indicated the much-anticipated recession is looking less and less likely.  Conclusion of the first phase of the China trade deal would likely settle the stock market but the trade dispute has not fundamentally harmed the American economy.  While the Presidential Election will certainly dominate the headlines and the winner may well decimate America’s economy if the Democrats elect a far-left candidate, harm to the 2020 corporate site location marketplace is doubtful to be caused by the election. The United States will remain a growth market and compares well to global competitors from a macroeconomic standpoint in 2020.

END_OF_DOCUMENT_TOKEN_TO_BE_REPLACED

The Ohio Export Internship Program matches businesses interested in growing exports with highly motivated college students who have taken export-focused coursework. The Ohio Department of Development offers participating small to medium-sized businesses a 50 percent reimbursement for the wages of the intern.

END_OF_DOCUMENT_TOKEN_TO_BE_REPLACED

This is an incredibly exciting and auspicious time for Ohio’s bioscience, health and life sciences industries, with incredible growth and massive record investment in recent years. In 2020, bioscience companies in the state attracted a record $3.3 billion from sources including venture capital, exits, angel investment, federal research grants and other state initiatives.