Changing the “R-Word” Mindset at the 2018 Site Selectors Guild 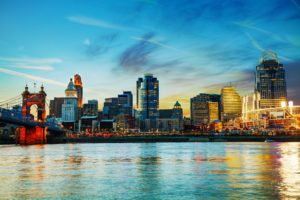 Late last month, hundreds of economic development influencers left Greater Cincinnati with a new mindset of the Cincinnati region, the state of Ohio and even the Midwest in general.

REDI Cincinnati had the honor of hosting the 2018 Site Selectors Guild (SSG) Conference. And in the spirit of the start of baseball season, I’d say they hit a home run. Held for the first time in Ohio, the SSG event attracted roughly 400 economic developers and site selection consultants from around the world. From a chartered streetcar, attendees got a top-notch tour of Cincinnati’s selling points, visiting the revitalized Over-the-Rhine neighborhood, touring the Cincinnati Music Hall and snapping a pass at Paul Brown Stadium.

I had the pleasure of speaking at the welcome dinner. Instead of sharing the usual talking points and statistics, my goal was to make everyone in that room, especially the 44 attending site selectors, drop the “R-word” – as in Rust Belt – from their vocabulary. This more than 30-year-old phrase is overused and, quite frankly, outdated. But unfortunately, a word like this carries a lot of power that can negatively influence a region for years. My questions to the audience were simple. Does the Rust Belt sound like a place you want to plant your company flag, invest your hard-earned capital or risk your reputation? Of course not. It is time that we retire this word. Let’s stop using it in our conversations and our content and when talking with the media.

America’s Midwest, of which Ohio is a leader, is a global powerhouse of competitiveness, efficiency and opportunity. Ohio competes every day against the world, and we win. Honda, Procter & Gamble, AK Steel, Kroger and many more companies made a choice to plant their flag here in our state.

In an interview with the Cincinnati Business Courier, Jerry Szatan, a founding member and past president of the Site Selectors Guild, admitted it had been more than a decade since he visited Cincinnati. He still pictured it as a traditional manufacturing city, but he came away with an entirely new opinion. “It just felt like a much livelier place, looking much more toward the future,” Szatan said. “Everybody I talked to was equally impressed.”

REDI Cincinnati and their corporate partners did an amazing job of providing an authentic experience for SSG attendees, many of whom will go back to their corners of the world and talk about the vibrant and growing city in Ohio they visited.  Now it’s also up to all of us public and private sector leaders to do the exact same thing and focus on the future, not the “R-word” that belongs in a museum.