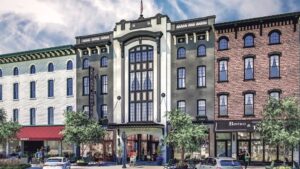 Photo credit: Northpoint Ohio Architecture
This photo is a rendering of what the East entrance could look like after revitalization is complete of the Historic Arcade in Downtown Newark.

Over the past eight years, the private/public investment into Downtown Newark has grown to approximately $130,000,000. Highlights of various Historic building rehabs, streetscape, sewer/storm water separation project, Hilton Doubletree rehab and much more are included in the revitalization efforts. Now, with the help of over 35 donors, State & Federal Historic Tax Credits, Transformational Mixed-Use Development Tax Credits and other programs, Newark will undergo a $15,000,000 Historic Rehab of the Arcade.

“Through public and private investment, Newark has been able to experience a complete renaissance. As the Seat of Licking County, we need to be a step above. With the leadership of Newark Development Partners (CIC), which is the City’s economic development arm, the strides made in a short time are unbelievable. Other cities around the State have taken notice of Newark. Now, with our planning and shovel ready projects, we are prepared to assist with the Intel Project coming into our western part of the county. We are giving the new residents Intel is bringing in, a reason to drive east when leaving work each day,” said Mayor Jeff Hall.

Originally opened in 1909, the city-block-long Newark Arcade was only one of eight glassed-in shopping centers in Ohio. After many years of successful business and creating lasting memories with the community, the Historic Arcade began to fall into disrepair. Newark Development Partners (NDP), the City of Newark’s community improvement corporation saw the potential to revitalize the Historic Arcade and purchased the property in November of 2019. After spending over two years working on cleaning up the property and stabilizing the structure, NDP is prepared to move into phase two: revitalization.

NDP has been working closely with Schooley Caldwell Architecture and Northpoint Ohio Architecture on this enormous project. In January, NDP hired general contractor, Robertson Construction based out of Heath, Ohio to lead way on this project. Many of the iconic elements in the Historic Arcade will be brought back to life such as the glass skylight roof and terrazzo floors in the main corridor. The east façade facing Third Street will be brought back with big windows, marquee, flag pole and many other features. The Historic Arcade will hold up to 24 commercial spaces on the first floor and 19 apartments on the second and third floors.

The affect this property will have on the economy of downtown Newark is expected to be substantial. As many as 125 jobs are anticipated to be created once the revitalization is complete. The work will begin soon, and a grand opening is tentatively scheduled for the summer of 2023.

By bringing the Historic Arcade back into the fold of the Downtown, we are further establishing a foundation for success in our community through economic development.

If you are interested in learning more about the revitalization of the Historic Arcade in Downtown Newark, please email megan@newarkcic.com